In case you haven’t heard, macOS Mojave is bringing a new “Apple Events sandbox” that will affect the behavior of apps that send Apple Events to other apps either directly, or by way of running an AppleScript. I wrote more about this on my non-development blog, Bitsplitting: Reauthorizing Automation in Mojave.

Typically, the system is simply supposed to ask users whether they approve of the Apple Events being sent from one app to another, but in some instances it seems the events are rejected without ever prompting the user. My friend Paul Kim of Hazel fame asked in a developer chat room whether any of us were having this kind of trouble specifically with apps built in Xcode 10, against the macOS 10.14 SDK.

This rang a bell for me on two levels: first, I had seen a similar behavior with FastScripts, which I eventually fixed by switching it to a much newer build system, and dropping support for versions of macOS older than 10.12. It was the right time for me to make those changes, so I didn’t mind doing it, but I never quite understood why the behavior was happening.

I noticed after building and running on my developer Mac (which is running the 10.14 beta), I was still experiencing the behavior Paul described. With FastScripts, these kinds of alerts pop up all over the place, because by virtue of running scripts, users are often incidentally sending Apple Events to other apps. Here’s a simple example script that I can run via FastScripts:

When I run this with a version of FastScripts that was linked against the 10.14 SDK, I get this error message from FastScripts itself. The system never prompts to grant permission: 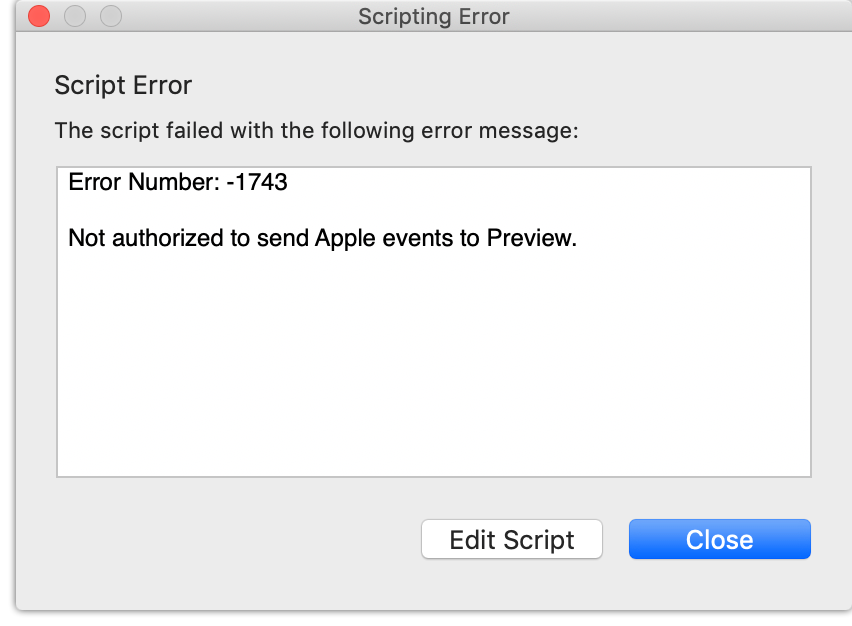 Until Paul mentioned his own problems, I glossed over these failures because I was satisfied that my production built versions, linked against the 10.13 SDK, were “working fine.” But Paul’s report got me thinking: was it possible there is some unspoken contract here, whereby linking against the 10.14 SDK opens up my app to additional privacy related requirements?

I tapped into Xcode’s Info.plist editor for FastScripts, added a new field, and typed “Privacy” on a hunch, because I’ve come to realize that Apple prefixes the plain-English description for most, if not all, of their “usage explanation” Info.plist fields with this word: 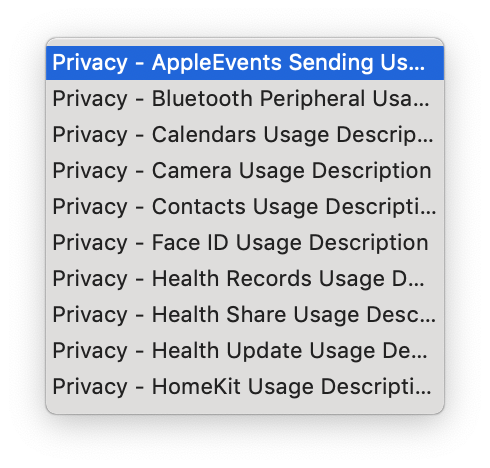 Aha, that first one looks promising. You can right-click on an Info.plist string in Xcode to “Show Raw Keys/Values”, and doing so reveals that the Info.plist key in question is “NSAppleEventsUsageDescription”. After adding the key to my app, I built and run again, and running the same script as above now yields the expected authorization panel:

I’m not sure if requiring the usage description string is intentional or not, but it’s probably a good idea even if, as in the case of FastScripts, you have to be pretty vague about what the specific usage is. I don’t think this usage string was covered in the WWDC 2018 session about macOS security. Hopefully if you’ve run into this with your Mac app, this post will help you to work around the problem.